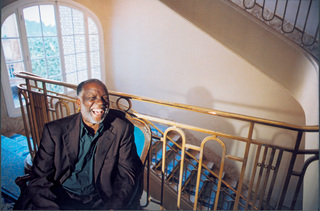 When most 73-year-olds indulge in an afternoon nap, it's because their careers are well behind them, and they've reached a point in life where they have trouble sleeping through the night and, consequently, staying awake all day. Ahmad Jamal, however, is not your typical 73-year-old. When the jazz piano titan failed to answer his telephone earlier this week at his home in New York's Hudson Valley, it was because he was trying to nap away a case of jet lag.

"We're just coming back from Australia," he explains apologetically after returning his voice mail later that day. "That's why I'm up and down, bed-wise."

Jamal's career, on the other hand, has been nothing but up recently. The trip to Australia was his first, after "some 40 years" of being asked. "I've had offers," he says, "but I've never accepted. They crossed the t's and dotted the i's this time, so we went there."

"We" being the same trio that opens a three-night stand tonight at the Regattabar: Jamal, long-time bassist James Cammack, and drummer Idris Muhammad, a veteran sideman to everyone from Lou Donaldson and Joe Lovano to Fats Domino and Roberta Flack.

Earlier this month they sold out the 2,679-seat Sydney Opera House. The same trio, which travels about six months a year, performs on Jamal's 2003 CD, "In Search of Momentum." And they appear together on a DVD, due out this spring, recorded last summer at a festival in Baalbek, Lebanon.

Critics have called "In Search of Momentum" Jamal's best recording in years, and critic Stanley Crouch flat out declares him the greatest living jazz pianist.

"He's the king, as far as I'm concerned," says Crouch, a newspaper columnist who has taught jazz studies at Columbia and Juilliard and is writing a biography of Charlie Parker. "I don't think anybody plays with greater freedom than he does, and that includes Ornette Coleman.

"[Pianist] Eric Reed and I were talking, and he said, `Well, he's the king of avant-garde piano,' " Crouch says. "But avant-garde in [Jamal's] playing doesn't mean `ugly.' He's a very lyrical player."

A Pittsburgh native, Jamal hit the road at age 17, moved to Chicago, and began making records in the early '50s. Miles Davis was an early admirer and used to prod his then-pianist, Red Garland, to play like Jamal. Davis also borrowed compositionally from Jamal.

"Miles and Gil Evans used some of my small ensemble stuff orchestrally on `Miles Davis + 19,' " Jamal says. "Those things were used note for note -- they were just converted into big-band arrangements."

But Jamal also had detractors early on, especially after his enormously popular 1958 album "But Not for Me," recorded live at Chicago's Pershing Hotel. Certain critics disliked his pared-down style and dismissed him as a glorified cocktail pianist.

"The critics weren't really hearing what he was doing," says James Williams, a talented pianist himself and the director of jazz studies at William Paterson University in New Jersey. "They wanted him to go in a direction he didn't want to. It takes courage to go your own way."

In any case, the album became one of the best-selling jazz albums of all time, among the first to top a million in sales. A few years ago, jazz buff Clint Eastwood repopularized two tracks from "But Not for Me" -- in particular the Jamal signature tune "Poinciana" -- by putting them on the soundtrack of "The Bridges of Madison County."

"It really was an historic session," says Jamal. "Not too many of us instrumentally get that kind of response. Miles Davis got it. Dave Brubeck has enjoyed it. Chuck Mangione. Herbie Hancock. There are very few of us who have had the kind of success as far as public response is concerned, because the singers get all the hits."

These days Jamal is playing a lot more of his own compositions -- a mix about 80 percent his own and 20 percent standards, he says. And his playing on disc has grown more muscular and more refined.

One thing you won't hear at the Regattabar is the band being announced as the Ahmad Jamal Trio. Jamal dislikes the term "trio," which he finds limiting; he prefers calling this piano-bass-drums combo a "small ensemble." He doesn't much care for the term "jazz," either, preferring "American classical music."

"I coined that phrase some time ago," Jamal says. "I think musicians need to redefine the word `jazz,' because what we've done is sophisticate a very unsophisticated word.

"You go to the dictionary, and there are certain things that are called jazz that are unmentionables." He laughs. "It's up to us to give it a more sophisticated title, [one] that it deserves."

The distance from jazz to European classical is less than it might seem. "All the musicians that I know of are improvisers," Jamal says, "from Mozart to Duke Ellington to Billy Strayhorn to me. Bach, Basie -- they're all improvisers." Hence, "American classical music."

Whatever you call it, Jamal is looking forward to playing it at the Regattabar.