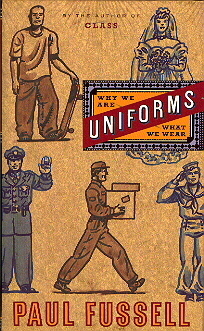 Uniforms: Why We Are What We Wear, by Paul Fussell

Uniforms: Why We Are What We Wear
By Paul Fussell
Houghton Mifflin, 204 pp., illustrated, $22

Paul Fussell has throughout his life ''had a thing for uniforms.'' The ones he himself has worn have included the sailor suit of his young boyhood; the Boy Scout uniform that, rather than any genuine interest in scouting, inspired him to join the organization; the junior and senior ROTC uniforms of high school and college; the US Army attire he wore as a lieutenant in World War II Europe. He spent many years as an English professor, in which role ''practically compulsory was the daily get-up of gray flannel trousers and tweed jacket, often, of course, with leather elbow patches.'' Even since his retirement from the University of Pennsylvania, Fussell has worn a uniform of sorts, the foolproof ''classic navy blue blazer and khakis'' recommended by experts for today's ''business casual'' offices, ''to stay out of sartorial trouble.''

Fussell has also demonstrated a thing for writing sharp-eyed, corrosively witty assessments of American society, most notably in the 1983 ''Class,'' his wickedly insightful guide through the American status system. It not only made people laugh, it could also occasionally make them wince in self-recognition. ''Class'' went over so well that in 1991 Fussell followed it up with something similar: ''Bad or, the Dumbing of America,'' which skewered the mediocrity and pretentiousness of late-20th-century American life.

Fussell's new book, ''Uniforms,'' attempts to combine these two things of his. His fans will come to it gleefully anticipating the inevitable damage Fussell's H. L. Mencken-like curmudgeonliness will inflict on the pompous and third-rate as he riffs on ''why we are what we wear.'' But they will be disappointed. Fussell barely addresses the question raised by his book's subtitle. And, whether because of its narrower subject matter or because Fussell's crankiness is waning, ''Uniforms'' is considerably less funny and absorbing than its predecessors.

The new book admittedly has some solid moments. On military uniforms Fussell is both entertaining and enlightening, despite his heavy emphasis on uniforms of World War II vintage. The personal touches that figures like Eisenhower, MacArthur, and Patton used to tweak their uniforms - and their reasons for doing so - are particularly intriguing. Fussell is good, too, in his take on blue jeans. He notes the role sex played in fueling their overwhelming popularity (''Because of the tight-fitting crotch and rear, jeans became an indispensable part of a young man's dating and seduction equipment'') and points out the futility of pretending that blue jeans have not themselves evolved into a uniform.

Most of this better stuff comes toward the front of the book. One advances through it hoping Fussell is still warming up, and that he'll be even stronger when he works around to explaining why the sort of people who read his books wear the uniforms they wear. Instead, Fussell moves from one sliver of society to another: from clergy (and Hasidic Jews and the Amish) to United Parcel Service and other delivery services to ''transportationists'' (Amtrak conductors, bus drivers) to police to marching bands to ''the pitiable misfits of the Ku Klux Klan,'' and so on. Some of these are amusing and worthwhile, others a lot less so. Especially weak is the chapter on ''uniforms of the faithful,'' which reads as if Fussell were going through the motions, either bored with the topic himself or uncharacteristically leery of giving offense.

The quasi-obligatory ''uniforms'' worn by Fussell and most of his readers are barely discussed. These readers, one assumes, would be made up largely of the ''category X'' people who slipped the bonds of the American status system in ''Class'' - the same sort of bourgeois/bohemian meritocrats David Brooks explores in his more recent ''Bobos in Paradise.'' Any book purporting to explain ''why we are what we wear'' ought to spend a little time examining ordinary office attire, and potential peripheral issues such as, say, how magazines like Vogue and Harper's Bazaar influence the rising and falling of women's hemlines. But aside from chapters on nurses and brides, female uniforms are almost totally ignored in ''Uniforms.'' Fussell's excuse: his lack of personal experience. ''I have worn many a trousered uniform and buckled many a cartridge belt,'' he jokes, ''but I have never worn a dress or fastened a garter belt.'' (Of course, he never let not being a prole himself prevent him from observing and lambasting their habits in ''Class,'' or doing likewise with all the other American social strata.)

Male office uniforms don't fare much better, being taken up and dropped in just three pages. We're told that dark business suits remain the uniform of serious businesses like law and banking; that the 1975 book ''Dress for Success'' demonstrated that, up until a quarter-century ago, at least, neckties still brought their wearers the respect of strangers. And that's all. Why did men begin wearing suit jackets and ties in the first place? Why are sport coats still popular in some business casual offices, and polo shirts or even T-shirts in others? What's with Steve Jobs's blue jeans and black turtlenecks, or Gerald Levin going tieless as he handed Time Warner over to AOL? Fussell never bothers tackling any of it.

''Uniforms'' has its merits, but Fussell set himself a high standard with the brilliant and all-encompassing ''Class.'' This new book, alas, isn't in the earlier one's class.

Bill Beuttler is a former senior editor of Men's Journal and Boston magazine.