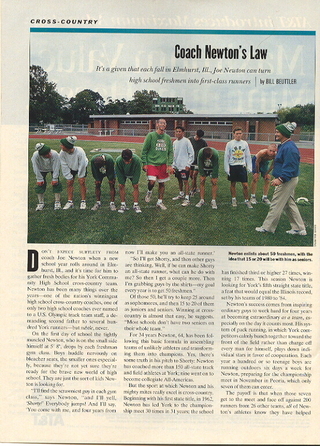 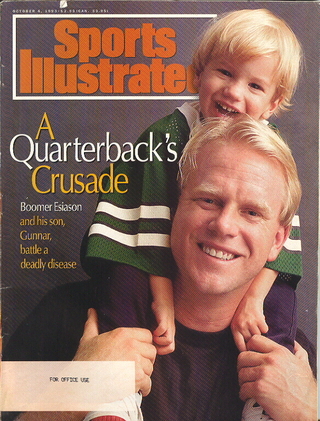 It's a given that each fall in Elmhurst, Ill., Joe Newton can turn high school freshmen into first-class runners.

DON'T EXPECT SUBTLETY FROM coach Joe Newton when a new school year rolls around in Elmhurst, Ill., and it's time for him to gather fresh bodies for his York Community High School cross-country team. Newton has been many things over the years -- one of the nation's winningest high school cross-country coaches, one of only two high school coaches ever named to a U.S. Olympic track team staff, a demanding second father to several hundred York runners -- but subtle, never.

On the first day of school the tightly muscled Newton, who is on the small side himself at 5 ft. 8 in., drops by each freshman gym class. Boys huddle nervously on bleacher seats, the smaller ones especially, because they're not yet sure they're ready for the brave new world of high school. They are just the sort of kids Newton is looking for.

"I'll find the scrawniest guy in each gym class," says Newton, "and I'll yell, `Shorty!' Everybody jumps! And I'll say, `You come with me, and four years from now I'll make you an all-state runner.

"So I'll get Shorty, and then other guys are thinking, Well, if he can make Shorty an all-state runner, what can he do with me? So then I get a couple more. Then I'm grabbing guys by the shirts -- my goal every year is to get 50 freshmen."

Of those 50, he'll try to keep 25 around as sophomores, and then 15 to 20 of them as juniors and seniors. Winning at cross-country is almost that easy, he suggests. "Most schools don't have two seniors on their whole team."

For 34 years Newton, 64, has been following this basic formula in assembling teams of unlikely athletes and transforming them into champions. Yes, there's some truth in his pitch to Shorty: Newton has coached more than 150 all-state track and field athletes at York; nine went on to become collegiate All-Americas.

But the sport at which Newton and his mighty mites really excel is cross-country. Beginning with his first state title, in 1962, Newton has led York to the championship meet 30 times in 31 years; the school has finished third or higher 27 times, winning 17 times. This season Newton is looking for York's fifth straight state title, a feat that would equal the Illinois record, set by his teams of 1980 to '84.

Newton's success comes from inspiring ordinary guys to work hard for four years at becoming extraordinary as a team, especially on the day it counts most. His system of pack running, in which York competitors calmly bunch together toward the front of the field rather than charge off every man for himself, plays down individual stars in favor of cooperation. Each year a hundred or so teenage boys are running outdoors six days a week for Newton, preparing for the championship meet in November in Peoria, which only seven of them can enter.

The payoff is that when those seven get to the meet and face off against 200 runners from 26 other teams, all of Newton's athletes know they have helped forge a team that will run a smart race, win or lose. "We never beat ourselves," says Newton. "We always run up to our potential."

"He's certainly the best motivator I've ever been around in sports -- at all levels, from the pros on down," says George Andrews, who was one of Newton's student managers from 1963 to '67 and is now a Chicago-based sports lawyer whose clients have included Isiah Thomas and Magic Johnson.

And how does the master motivator bring about such stunning success? Partly with gimmicks. Each year, Newton's team rides to the state championship awards presentation in stretch limos (rented for the occasion by the runners' parents), and the guys get to wear tuxedos (donated by a local store) if the team finishes third or better. For the past couple of years Peter Coe -- the father and lifelong trainer of two-time Olympic gold medalist Sebastian Coe -- has flown in from England to deliver pep talks to York's runners just before the state meet. (Shortly before the 1984 Olympics, Newton and his wife, Joan, put Sebastian up at their Oak Brook home while he trained at the York track for 10 days en route to Los Angeles, where he won the gold medal in the 1,500 meters.)

Yet another gimmick was added last fall, not long after the Games in Barcelona. Several York runners -- inspired by the U.S. Olympic volleyball team -- turned up at practice with their heads shaved. Asked by his athletes what it would take to get him to do likewise, Newton replied, "Get me another state title." They did so, and Newton gladly honored his promise a few days later when his head was shaved during an assembly in front of the whole school.

Most important, however, is the daily contact between the coach and his runners. Everybody has a nickname, and everybody knows exactly how Newton thinks he's doing at any given moment. ("If a guy does good, I hug him," says Newton. "If he does bad, I chew his butt out.") And every day, Newton employs a three-part program to make sure he stays in touch with each and every runner. First he checks in the runners himself at the beginning of every practice, taking care to make eye contact with each one as he does so. The same goes for checking out, when each boy is required to shake Newton's hand. Between check-in and check-out, Newton says, he makes a point of trying to call out each boy's name at least once while he's on the practice field.

"I didn't think anything about it. I was just flipping that out.

"The kid moved to Florida after his freshman season, and he wrote me a letter a year later that said, `You know, I really miss York. I know I was a rotten runner, but I could hardly wait to get to practice every day because I knew that every day I'd hear you yell that about me looking great. Nobody does that for me down here.' "

Newton hadn't realized what a strong effect a little attention could have on a teenager. Since then he has made sure that every runner gets some notice every day, "so that he knows that I know what he's doing. I know he's working hard."

No one appreciates hard work more than Newton, who scratched and clawed his way to 12 letters in five sports at Parker High School on Chicago's South Side. He ran for four years (1947-51) as a sprinter for Northwestern, then spent two years in Missouri coaching basketball and track for the Army at Fort Leonard Wood. He arrived at York in 1956 and took over the track and cross-country teams four years later.

Today Newton drives himself as hard as he ever has. Each morning he rises at 4:30 and runs two to six miles. He runs seven days a week, straight through Chicago's winters, in sickness or in health -- on Aug. 3, 1993, he celebrated his 20th anniversary without missing a run, a streak that has survived such nuisances as a pair of stress fractures and a bout with pneumonia. He gets to school well before his first class, often to lift weights, teaches five gym classes between 7:45 a.m. and 2:15 p.m. and spends much of the afternoon coaching until about 6 p.m.

As hard as his runners practice, they can hardly help noticing that their coach beats them to school every morning and that he is still there when they go home at night.

Nor can they help being impressed with Newton's Olympic coaching stint at the 1988 games in Seoul. Every member of the track staff there had a number of assignments. Newton helped coach the marathoners as well as the 800- and 1,500-meter runners. His managerial duties included keeping people motivated (motivation is the subject of one of three books he has written), taking charge of the track team's many bulletin-board directives and -- by far the most important -- making sure the runners got to the starting lines on time. That last detail Newton got because no one else wanted it, and it had him "sweating bullets."

Coaching in the Olympics fulfilled a lifelong ambition for Newton. But that onetime deal, as thrilling as it was, didn't measure up to his regular day job. It certainly didn't afford him freshmen like Shorty.

"You put a little pressure on a vacillating teenager," he says, "give him a little discipline, a little motivation, and all of a sudden he grows from a nothing into a something. That's the most satisfying thing in the world."

CAPTION: Newton enlists about 50 freshmen, with the idea that 15 or 20 will be with him as seniors.