At Millbrook Vineyards, chardonnay grapes are made into standout wines. (Globe Photo/Jan Sturmann) 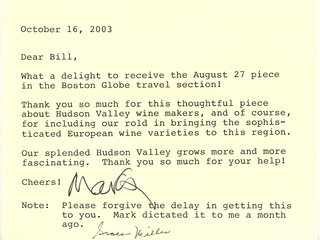 Check out www.hudsonriver.com/winetour.htm for a complete listing of area wineries.

It's a lot nearer than Napa

In New York, the Hudson Valley is a hot spot for wine enthusiasts

RHINEBECK, N.Y. -- It's amazing how unfamiliar New York's Hudson Valley is to most Bostonians, even with those Hudson River School paintings hanging in the Museum of Fine Arts. Fewer still know of the Napa Valley-style winery tours to be had there, just an hour or two's drive beyond the southern Berkshires. I knew about the wines produced and bottled here but hadn't gotten around to touring any of the wineries until a couple of weeks ago, after a buddy just back from a trip to Napa was looking for somewhere to drive to from Connecticut. I suggested we meet around Rhinebeck and see how this valley's wineries measure up against the famous ones on the other coast.

When Don showed up around noon that Friday, I saw why he was so eager to drive somewhere. He was in a bright red Nissan 350Z touring car that he'd bought recently. We swung through Red Hook for bagels and ate them on the drive down Route 9, me pointing out Hyde Park landmarks -- the Culinary Institute of America, the Vanderbilt and FDR estates -- en route to the Poughkeepsie bridge.

There are 20 wineries listed on www.hudsonriver.com, 15 of them on the west side of the river. Our first stop was at Benmarl Vineyards in Marlborough, where Mark Miller himself strolled over from his house across the lawn to lead us on our tour.

Miller introduced European grape varietals to New York, but how he came to be here is a story in itself. Miller was among the best-known magazine illustrators in the world after World War II, renowned for his drawings of handsome young couples in lust. An Oklahoma transplant, he made his mark first in New York City, then for nearly a decade in Burgundy illustrating European magazines. It was there he acquired his interest in old world varietals, but before decamping for France he had already bought the 36-acre farm he would rename Benmarl, for a few hundred dollars.

Miller recalled the elderly farmer who mistook Miller's reticence for reluctance as he mulled over purchasing the farmhouse as a weekend retreat from Manhattan. "He said, `Son, I'm getting to be an old man. If you make up your mind today, I'll throw in the farm.' "

That was in 1957. Miller is an old man himself now, 85 or 86 years old -- he couldn't recall which offhand. He recounted his history while taking us through the gallery of his illustrations. From there, we proceeded to the pressing room. "Oftentimes, I guess, people expect to see Lucille Ball," Miller joked as he swung the door open. The pressing room was followed by a look at Miller's private wine cellar, where hundreds of cobwebbed bottles stood stored on racks up to the ceiling.

After Benmarl, we made the short drive to Brotherhood Winery in Washingtonville, the nation's oldest continuously operating winery (its manufacture of church wines exempted it from Prohibition). The setup lacked Benmarl's view overlooking the Hudson, and the tour included sitting through a DVD on the history of the vineyards, which began producing wines in 1839. The winery took its current name after a pair of New York City wine merchants bought it in 1886 and renamed it for the Brotherhood of the New Life congregation in Amenia, N.Y.

Wine master Cesar Baeza joined us for a chat at the tasting bar. Baeza, 53, studied winemaking in his native Chile, with postgraduate work afterward in Spain and France, and took over Brotherhood in 1987 after working in Burgundy for PepsiCo's Wine & Spirits division. Baeza insisted we try his excellent pinot noir, and we spent an hour discussing local viticulture and how sad it is that America doesn't follow the European model of winemaking, where each region produces unique wines rather than conforming to consumer-comforting fads like the ongoing one for merlot. Afterward, we had just enough time to make our dinner reservation at the nearby DePuy Canal House (see "Traveler's Taste," Page E5).

Don returned to the valley the next day with his wife and son. We met for sandwiches at Millbrook Diner, then drove to Millbrook Vineyards, maker of the splendid cabernet franc we had drunk the night before at the Canal House. My first taste of Hudson Valley wine had been a bottle of Millbrook's Hunt Country Red, which I had found on the wine list at Lia's Mountain View Restaurant in Pine Plains five years ago.

Millbrook's tour paid more attention to the actual winemaking process than the others we took, and it offered some of the best wines; among whites, its Castle Hill Chardonnay and Chardonnay Proprietor's Special Reserve are standouts. Onetime New York state agriculture commissioner John Dyson opened his Millbrook operation in 1981.

On Sunday, I stopped off at Clinton Vineyards by myself before driving back to Boston, wine farms being exempt from the state's blue laws. The owners, Ben and Phyllis Feder, were both in Rhinebeck on errands, so wine master Mike Kelsey, 44, took me through the tasting while we awaited their return.

The specialty had been Seyval blanc since Ben, a well-known book designer in New York City, planted vines in 1974 and began selling wine four years later. Phyllis, also a graphic designer, joined him here 15 years ago, and it was she and Kelsey who prodded Ben into experimenting with dessert wines, though a protracted run of serendipity helped. First came the decision to turn some overripe Seyval grapes into the dessert wine Romance. Then a local grower phoned with 1,000 pounds of raspberries he didn't know what to do with; that became Embrace. After a similar windfall of blackberries turned up and was transformed by Kelsey into Desire, Phyllis began marketing the trio as Menage a Trois. Clinton also makes an excellent cassis, from locally grown black currants.

What you won't find grown at Clinton are red wines, but the day I visited, some merlot was available for tasting from Alison Wines & Vineyards in Red Hook. I ran out of time and didn't get to see the Alison operation on this trip, but I knew I'd be back. Judging by the fine time he had sampling the Hudson Valley those two days, so will Don.

Bill Beuttler is a freelance writer who lives in Swampscott.