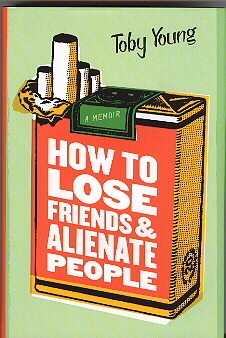 How to Lose Friends & Alienate People

Toby Young is either a much cleverer chap than he lets on or he’s one very lucky laddie. Then again, maybe he’s a bit of both. Whatever the case, his How to Lose Friends & Alienate People — already a bestseller in England, its film rights quickly snatched up — provides an entertaining look into the peculiar world of one of New York’s glossiest magazines, through the eyes of a sometimes astonishingly dim-bulbed Brit.

The Conde Nast magazine empire and its owner and chairman, S.I. Newhouse Jr., have long had a thing for English imports. Its star editors-in-chief through much of the ’80s and ’90s, after all, were Anna Wintour at Vogue and Tina Brown at Vanity Fair and, later, The New Yorker. Another British transplant, onetime Details editor James Truman, succeeded Alexander Liberman as the company’s editorial director in 1994 (at the tender age of 35).

Little wonder, then, that Graydon Carter, Brown’s successor at Vanity Fair, phoned up to offer Young a monthlong, $10,000 “tryout” a couple of weeks after The Modern Review, the 15,000-circulation pop-culture magazine Young had spent the previous four years editing in London, was shuttered in 1995. “Listen,” Carter tells Young, then 32, “I shouldn’t be telling you this, but Si wants to meet you. He doesn’t ask to meet a lot of people, you know.”

On July 5 of that year, Young reported to his first day of work at Vanity Fair wearing “vintage Levis and a Hanes XL T-shirt that reproduced a Modern Review cover featuring a bare-chested Keanu Reeves and the strapline: ‘Young, Dumb and Full of Come.’” His excuse? Carter’s assistant had told him that the office dress code was “very casual.” Carter patiently explained that “casual” in this context means khakis and Polo shirts, and dispatched Young to the nearest Gap to obtain some.

The clothing gaffe proved the first of many. Nonetheless, the tryout soon turned into a rolling six-month contributing-editor contract, at $5,000 per month, that would eventually stretch to two years. (Young didn’t suffer much from the pay cut — by that time he was already earning an additional $5,000 a month as the New York correspondent of the English newspaper The Evening Standard.)

A sampling of Young’s more inspired nincompoopery over those two years:

* Hiring a stripper to perform at Vanity Fair’s hyper-politically-correct offices on “Take Our Daughters to Work Day.”

* Infuriating Carter with an overly familiar and essentially unwitty insult (poking fun at some long-forgotten article Carter had written for GQ years earlier) as payback for Carter having angrily ordered Young to vacate a reserved seat that wasn’t his at a New York fashion show.

* Screwing up his first important interview for the magazine by asking, as his first two questions, whether the then-not-yet-out actor Nathan Lane was Jewish or gay. (“‘What were you thinking?’ asked Graydon, too staggered by my ineptitude to work himself up into a proper rage. ‘You can’t ask Hollywood celebrities whether they’re Jewish or gay. Just assume they’re both Jewish and gay, okay?’”)

* Being photographed sniffing cocaine during a photo shoot in London, and eventually snorting himself into a temporary case of facial paralysis on the same trip. (The trip, a huge and expensive Vanity Fair operation to assemble the special “Cool Britannia” issue that had begun as Young’s idea, was supposed to have been his last big chance to prove himself.)

* Turning up in the New York Post’s Page Six gossip column for unsuccessfully trying to skip out on a check at the hip downtown vodka-and-cavier bar Pravda. This particular buffoonery was the one that caused Carter to finally unplug Young’s failing contributing editorship from life support.

All that evidence to the contrary, Young is no dunce. He was educated at Oxford, Harvard, and Cambridge, and it was during his Fulbright year as a special student at Harvard that he picked up the ideas he spends much of this book harping on. He found the Harvard campus far too politically correct, a troubling manifestation of the “mild despotism” that Alexis de Tocqueville had warned of a century and a half earlier in Democracy in America. He discovered an antidote to those PC horrors in the wisecracking, Front Page-era journalists that populated screwball comedies like His Girl Friday, The Philadelphia Story, and It Happened One Night, which he stumbled upon in philosophy professor Stanley Cavell’s course on “the Hollywood Comedy of Remarriage.” He became a devotee of the satirical magazine Spy, which besides taking its name from The Philadelphia Story was co-founded and -edited by Graydon Carter.

Young hoped to relive the heyday of the original, pre-WWII Vanity Fair when he came to New York, but the time of journalists as hard-drinking, smart-alecky free thinkers had long since passed. And Young himself was no Ben Hecht. Though he drank as hard as anyone at the Algonquin Round Table ever did, Young’s brand of wit ran more toward English-import laddie mags like Maxim and FHM than that of, say, Dorothy Parker or Robert Benchley. Most of the better one-liners in his book are quoted from others, especially Graydon Carter, who, despite Young’s quibbles about his having gone from ridiculing celebrities in Spy to celebrating them in Vanity Fair, remains easily the most Hechtian self-made wisecracker to turn up in Young’s book.

The insider’s tours Young provides of New York nightlife and the magazine publishing world are funny enough, though, even if that ground has been covered earlier (and perhaps better) in novels like Jay McInerney’s Bright Lights, Big City and Ted Heller’s Slab Rat. Young’s book, of course, is nonfiction, and in it he names real names. His other top selling points: solid story-telling skills, a likable willingness to tattle on his own stupidities, and, in the end, having brains and heart enough to finally set aside his Johnnie Walker Black and celebrity worship and grow up. As a bonus, he gives us a real-life romantic entanglement almost worthy of a screwball comedy.

Needless to say, Si Newhouse quickly abandoned his eagerness to meet Toby Young. If How to Lose Friends and Alienate People’s concluding chapters are to be believed, however, the feeling by now is mutual.

Bill Beuttler is a former senior editor of Boston magazine and Men's Journal.