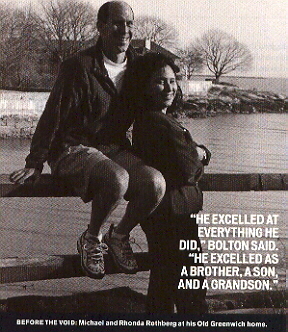 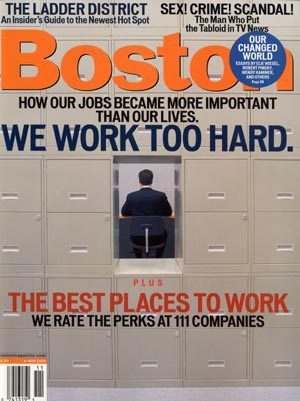 Out of the glare of the television lights, how one Massachusetts family bade a son good-bye.

The mourners — about 700 of them — started gathering at Greenwich, Connecticut’s Temple Sholom around noon on Sunday, September 23. Shortly before one, Rabbi Mitch Hurvitz called the family of Michael Rothberg together for a private prayer and to perform the Jewish kri’a ritual. As the cantor used scissors to snip black ribbons pinned to Iris, Jay, Rhonda, and Celia Rothberg, the rabbi explained that this was being done to symbolize the rending of garments by the bereaved.

The service began with a prayer, followed by a song of mourning sung with terrible beauty by the cantor. Then the parents, Iris and Jay, strode forward to remember their son. “Michael came into my life on May 27, 1962,” his mother began, “and he was a joy to me every day since then. Even as a child, he was always loving, giving, and generous, and smart too.” She told of how he rented a house on the Cape for a two-week family vacation in July. It was, she said, “like a gift given to us before this terrible tragedy.”

Jay spoke of how his son went to McGill University in Montreal after graduating from high school in Sharon, where he had grown up. McGill “was a great place because it was close to skiing, and Michael loved to ski.” From there Jay traced Michael’s career to his position as head of program trading for Cantor Fitzgerald. The bond brokerage lost nearly 700 employees in the World Trade Center’s north tower. Jay sniffled as he named several of Michael’s colleagues who had also been lost. The widow of one sat in the audience, pregnant with their third child.

Younger sister Rhonda came forward next. She had been remarkably self-possessed in the 12 days since the attack. But when she came to the place in her eulogy that talked about the void left by her brother’s death, she wept. Her father returned and held her hand while she finished her remarks.

A friend, John Massingale, emphasized Michael’s strong character. “They were probably all arguing about who should be the last person out the door that Tuesday morning,” Massingale said. “But there’s no question about it — those were his guys, and he was the last one to leave.” Alan Bolton, Michael’s college roommate, spoke with his brothers, Jamie and Chi, flanking him. As he neared his conclusion, Bolton’s voice began rushing. Jamie began silently reading along, mouthing the concluding words, as if willing his brother through his grief. “He excelled at everything he did,” Bolton said. “He excelled as a brother, a son, and a grandson. He excelled as a businessman, a colleague, and a competitor. He excelled as an uncle, a neighbor, a skier, and a nephew. He excelled as a friend.”

Connecticut Senator Christopher Dodd, the final eulogist, denounced the “savagery” of those responsible for Michael’s death. He said he himself had become a father for the first time, at age 57, two days after the attacks. “When I asked if there was anything I could do for them, Jay and Iris said, ‘Hug your child.’”

Later, at the reception at Michael’s house, his uncle Danny walked into the billiard room and found himself tearing up at the sight of the table. Danny had moved his family a few doors from Michael’s in the late ‘70s, and Michael liked to come by and shoot pool. He recently had Danny’s table reproduced. Danny pointed out the diamond shapes inlaid along the rim, the net pockets, and the design carved into the wooden frame. “He was such a great kid,” Danny said. “Those nice things you heard today? Everything that was said was true — no exaggeration, no embellishment.”

Several paintings featuring the fat, happy figures of the Colombian artist Fernando Botero hung in the billiard room. These were copies done by Michael’s grandmother Celia, who took up painting in her seventies, after the death of her husband. The house was full of her artwork, and upstairs in Michael’s bedroom was her latest piece — a charcoal sketch of the water view behind his house.

Outside, guests gazed out upon the actual water view as they discussed Michael and whether there would be a war.

An American flag flew at half-mast.

By late afternoon, people began drifting away, heading for their homes in Massachusetts, Philadelphia, Toronto. That was also the time when a limousine pulled up and blocked the driveway. From it emerged Howard Lutnick, Cantor Fitzgeralds’s CEO, looking harried and inquiring if he was at the right place. Earlier that morning, Lutnick had attended another employee’s memorial. Had Lutnick — whose brother Gary had also been among the company’s casualties — not stayed at home to take his five-year-old son to his first day of kindergarten on September 11, he, too, almost certainly would have perished.

Assured that this was Michael Rothberg’s house, Lutnick hurried up the driveway to pay his respects to the family of yet another slain colleague.